We would like to acquaint this web-side visitors with the history of the RAYMAN Ltd.Kladno Company and its roots. RAYMAN Ltd. Kladno Company is a family owned firm.
It continues in business activities of grandfather of present firm co-partners, Mr Václav Rayman (*1891 - +1966), the smith-lock master from Kladno. He got a certificate of apprenticeship as a locksmith in 1909. 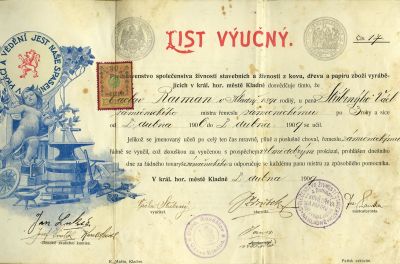 Mr Rayman got other professional skills and praxis wandering in Austria and at Machines Servicing department at steel works in Kladno where he worked during the world war I. He found a private smithlock trade business in Kladno in 1919 after the end of the war. The trade expanded step by step into two workshops – a machine shape workshop and a construction assembly hall - in 1939. The production consisted mainly of building steel constructions (gates, fences, steel support constructions, steel roll window-blinds) and several mechanical parts for steelworks in Kladno, hanged movable folds for slaughter-houses, mechanical stools, steel kiosks, steel electric switch boxes, steel constructions of industrial kilns, movable mechanical gates etc. 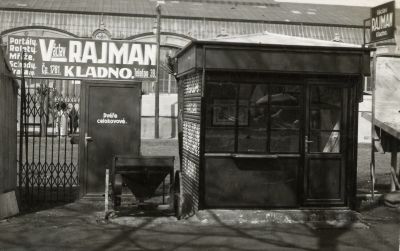 Mr Rayman also expanded purposefully his firm after the world war II. The expansion was interrupted by enforced firm delivery into a „Joint Communal Concern“ on 1.1.1950, which was constrained by the political situation of this period. He employed few tens of employees at that time.  Mr Rayman led to machinery both of his children, daughter Ludmila and son Václav. Both of them graduated at Technical High School of Machinery in Kladno and son Václav The Technical University in Prague, Faculty of Machinery after the war. 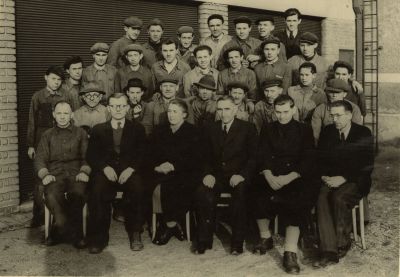 Mr Václav Rayman was a reputable expert in his branch of work, mayor of a Smith-lock Society in Kladno and member of executive board of Commercial Mutual Savings Bank in Kladno. Mr Ing. Václav Rayman Jr. (*1925) worked after his graduation at a Development Department at ČKD Prague and after his military service at the Paper Plant Štětí construct. He worked at ZVVZ Milevsko from 1954 for thirty years. He worked as a head developing technician in the field of pneumatic conveying, interplant railway and road bulk materials transport and  pneumatic discharging of bulk materials from storage silos. He published plenty of articles in professional magazines and presented results of his work at many professional conferences home and abroad. He is the author of many patents from pneumatic conveying branch. As a developer he laid theoretical fundaments of bulk materials conveying by flow feeder and he proved this system in several equipments in praxis. Even though the operation economy was not valued enough at that time, he always took a notice of investing, and especially operating economic of his equipments. He spared not only energy costs but maintenance costs, too. 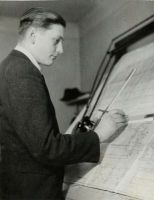 Mr Rayman changed his employment in 1984 – he came over from ZVVZ Milevsko to a Hutní Projekt Prague Concern Management. There he worked as a head specialist till 1990, when he was retired. As a pensioner he worked as a consultant in his specialisation for over ten years.

The grandsons of busyness founder in the family became pursuers of this mechanical family tradition. Both Mr Ing. Václav Rayman´s sons graduated at The Technical University in Prague, Faculty of Machinery. The older son, Ing. Tomáš Rayman  (*1953), worked from 1976 till 1991 at Hutní Projekt, Prague Plant, as a head designer of dedusting and ventilation systems. The younger son, Ing. Petr Rayman (*1957), worked from 1981 till 1992 at ZVVZ Milevsko at first as a designer of pneumatic conveying components at first and then as a head designer of ventilation systems.The main impulse to both brothers professional lives connection were social changes after the year 1989 and restoring of two scrubby workshops in Kladno in restitution in 1991. But the workshops were empty, without machines and facilities. Mr Ing. Tomáš Rayman got the trade licence for design and engineering works in 1990 already. The brothers Petr and Tomáš with his wife Květoslava founded the company RAYMAN Ltd. Kladno in 1993 after selling one of the workshops and the property squaring up from the others. The Company´s seat is in Ocelárenská street in Kladno where the company´s management and the technical office is placed. At the same time was the technical office in Milevsko founded which was placed in rent rooms in the beginning and now it has been placed in an own solitaire fully reconstructed building.
The roots of the long time successful developing of RAYMAN Ltd. company are visible at continuing to the values of a business environment of the First Republic (between the wars) as they are business honesty, high technical level of production, uninterrupted systematic technical development and reliability and service economy of machinery and technology systems. Fulfilment of customers needs and word keeping (as well as not written)
is the commonplace. These values were transferring over generations till the busyness in the present company where the basic rules are solvency and paying discipline, agreed delivery terms, technical and commercial terms keeping, parts and equipments of high technical level,low investment costs, high effectivity and operating reliability of equipments.